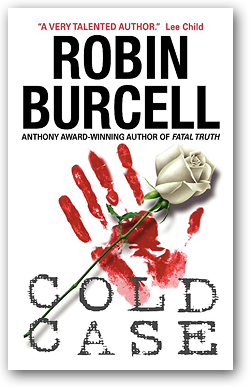 The panicked words echoed in my ears just as the shots had seconds before. My partner, Sam Scolari, dragged me toward the stairs out of the line of fire. My back hit the wall and we both fell.

"Anyone see the gunman?"

"What the hell happened?" came another shout.

I wasn't sure myself. We were on the second floor of the Twin Palms Motel, assisting Narcotics with a drug raid, on a case we hoped would lead to information on the homicide of Fiona Winchester, a woman killed at this very same hotel. They, Narcotics, were on the first floor, and had made their arrest, while Scolari and I had gone up the stairs looking for evidence that might tie into Fiona Winchester's murder, as well as a case against suspected mob boss Nick Paolini. He owned this building. Supposedly ran drugs from it.

"Where the hell is the goddamned ambulance?" someone shouted.

The surge of adrenaline had drained me completely as Scolari and I supported each other in the stairwell of the dank motel. Armed officers rushed past us. One of them stopped.

I looked up to see a rookie female officer, her face paling as she stared at Scolari.

"What?" he asked her, his voice gruff. "You never seen a little blood before?"

I shook my head at him, wanted to tell him she'd probably never been in a shooting before. Never realized the emotional impact, the way it slowed and fragmented one's thoughts. But I turned, saw Scolari's face, white as the officer's. Saw the blood covering his raid jacket. My stomach roiled with nausea.

Scolari met my gaze. He tried to smile. "You okay, Kate?"

Yeah, I wanted to say, vaguely aware of a siren wailing. It grew louder, but strangely seemed farther away. "What about you?"

He didn't answer. I don't know if he heard me.

The female officer was speaking into her radio and I couldn't hear a sound.

I realized then what had happened.

Looked down, saw the blood spreading on my shoulder.

I was the officer down.