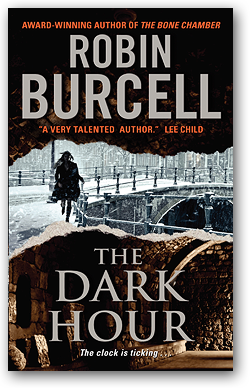 November 19
Ten miles off the coast of the Cayman Islands

"I'm not kidding. There are ruins down there. I saw them."

April Robbins lifted her scuba mask to get a better look at her diving partner's face as he treaded water just a few feet from her. Martin Hertz was a know-it-all, in her opinion, always spouting off that his father was a former Navy SEAL—which made Martin think he was the resident expert in diving. He was twenty-two, a year older than she in age, but light years younger in emotional maturity, and she was fast losing her ability to feign politeness around him.

"Ruins? You mean rocks?" she said.

"Where would rocks come from out here? They're ruins. "

She glanced back toward their boat, the Random Act, and the rest of their team, who were diving very near it, searching for signs of a sunken ship—even though they were all supposed to be studying the effects of global warming on ocean life. Frankly, she wanted to be there with them, not Martin, but he'd insisted on exploring in the opposite direction.

She lowered her mask, about to swim back to the boat, when he clasped his hands together and gave her a hangdog expression. "Please..."

"For God's sake, Martin. If those were ruins, someone would've discovered them by now. The professor definitely."

"He didn't see them. Just come with me, and if there's nothing there, go back and join the others. I'll leave you alone for the rest of the trip."

She turned around, glanced toward their friends, who didn't seem to notice the approach of a cargo ship. There were four other divers gathered around the Random Act, with their professor remaining on board, the dive flag up. The offshore wind carried the sound of their laughter toward her, and she wished herself there, until she saw Tim reach out and caress Diana Walker's face. At least it looked like a caress. Hard to tell with the water bouncing them up and down, and she suddenly wondered if that wasn't half her annoyance with Martin. He wasn't Tim. Great. Who was the mature one now?

"Fine," she said to Martin. "Where exactly are these ruins?"

He pointed in the opposite direction of the boat. Toward the open ocean.

April looked at the sky, thinking they might have another couple hours of sunlight. "Let's go see what you found." She put in her mouthpiece, dove, then followed Martin. As they neared the location, she took a frustrated breath, thinking that her first instinct was right. Just a bunch of scattered rocks, probably left over from some ancient volcanic activity.

She was about to rise to the surface when Martin tapped her on the arm, then pointed to where a shaft of sunlight lit up the ocean, the light becoming dimmer the farther down she looked. At first glance, it appeared to be more of the same barnacle- and algae-covered rocks, everything in hues of green, blue, and gray. But she watched in fascination as Martin directed her attention and she realized what she was looking at was a broken column. She followed him down farther, and saw another column, almost intact, as well as part of an arch, as though an ancient temple had come crashing into the water—which didn't make sense, since there was no land nearby for it to come crashing down from.

She wasn't sure how long she remained there, staring at the ruins, lulled by the sound of her air tank as she breathed in and out, as well as the muted rumbling of the freighter off in the distance. Her gaze caught on a school of tiny fish darting through the shadows of the ruined structures, and she swam closer, finding what she thought was the arm of a statue half buried in the ocean floor by the arch.

She dug in slightly, scooping out a handful of sediment at the bottom, then let it slip through her fingers. Something small and round fell. Envisioning a ceramic bead that had withstood eons under water, she caught it with her other hand, then kicked up closer to the surface and the light to see if it was anything significant.

A snail shell. She almost laughed at so anticlimactic a find. Still, she'd gotten to see the ruins. And though there was so much more she wanted to see, she checked her diving watch, noting they had less than ten minutes left of air, then signaled to Martin that she was ready to surface. He nodded, and together the two swam the rest of the way up.

"It was amazing," she shouted over the wind, after she pulled out her mouthpiece.

A loud whistling pierced her ears. She and Martin turned toward the sound. The air rocked with an explosion. A fireball lit up the horizon, then dissipated.

April jerked back. It was a moment before she recovered, then, "Oh my God!" She started swimming in that direction. "Where's the boat?"

She froze, heart thudding as she bobbed in the water. The freighter they'd seen earlier was positioned about fifty yards beyond where the Random Act had been. A small inflatable boat jetted from the larger ship toward the flaming debris. Two men sat within the boat, both armed with long rifles aimed toward the water. If these were pirates, they weren't bothering with any survivors for ransom.

"How much air do you have?"

"Swim as far away as we can. Under water, we'll have a decent chance. They might not know we're here."

She jammed in her mouthpiece, and just before she submerged, caught a glimpse of the pirates circling the area. She prayed that they hadn't been seen, that nobody bothered to notice two divers had escaped. And that ten minutes of air would be enough time for them to find a way out.

Return to The Dark Hour