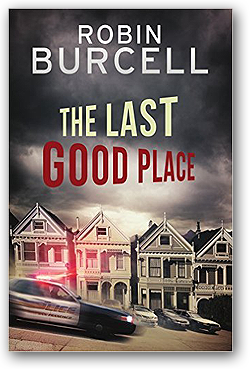 Marcie Valentine tugged at the waist of her running pants, zipped up her purple jacket, then grabbed an elastic tie, sweeping her shoulder-length dishwater-blond hair into a ponytail as she hurried down the stairs. Once in the kitchen, she turned the blinds enough to peer out the window over the wooden fence that separated her yard from her neighbor's. Trudy Salvatori, also dressed for running in a navy zip-up hoodie and black capris, sat at her kitchen table drinking a breakfast shake and reading the newspaper.

Marcie backed away from the window, took her cell phone, then called Trudy's number. "Hey," she said when Trudy answered. "Ready for the morning run?"

"Oh...I'm running a bit late this morning. I'll meet you near the bridge trail where we usually stop. Assuming I get out of here in time."

Marcie disconnected, stuffed the phone into her jacket pocket, then leaned against the counter. Even though she knew this was going to happen, even planned for it, she was second-guessing herself. She and Trudy had been friends, best friends, ever since Marcie and Devin moved into the house five years back. Just a few months ago, at a Cinco de Mayo party, Trudy announced that she and her husband, Tony, were putting their house on the market because they were divorcing. They'd fallen out of love.

Marcie had been shocked at the time. Not so any longer. No doubt in her mind as to why. Trudy was sleeping with Marcie's husband, Devin. Not that it mattered. At least it wouldn't after today, she thought as she heard Devin moving around upstairs, allegedly getting ready for work. And that was when she wondered if she really wanted this. Just let the Salvatoris move.

Pretend her own husband had never been unfaithful.

Or was she imagining Devin's affair with Trudy? So many little things had seemed odd.

Maybe she couldn't be sure about those things. But this? Devin suddenly guarding his cell phone, taking business calls after hours when he'd never done so before. The nights he worked overtime that also matched up to Trudy's extended hours at the campaign office...

The proof was there, and so Marcie had decided today was going to be the day. Devin belonged to her, not Trudy.

But when she went for her keys on the dining-room table, she couldn't find them. Her purse was right there, hanging on the back of the dining-room chair. No keys inside.

A quick and frantic search of the kitchen, then the little table by the front door, made her rethink her plans.

How was it that something like this always happened?

She was losing it...

Self-doubt crowded her thoughts, and she stood there in the middle of the kitchen, telling herself that maybe the keys were fate's way of waking her up, making her realize she was going down the wrong path.

No. She'd worked through everything in her mind, planned the entire day accordingly, and she wasn't going to let something that trivial get in the way.

Besides, there was a spare key beneath one of the flowerpots outside the back door.

She didn't need her keys for this to work.

That calmed her, and she walked over to the stairs. "I'm leaving!" she called up to Devin.

Her eye on the stairwell, she opened then closed the front door firmly, not leaving at all—instead, tiptoeing over to listen as Devin moved about in the bedroom above. A moment later, the sound of him talking softly. "She just left...Yeah. Come on up the back porch stairs."

Marcie bit her lip, tempted to race up and stop him now before Trudy got there. But suddenly she heard him in the hallway. And the sound of the gate latch in the side yard startled her. She slipped into the kitchen, shutting herself into the broom closet. Feeling like a fool, she peered through the slats, trying to contain her fury when she saw Trudy walk past the backdoor window, then heard her run up the patio stairs that led to the master bedroom balcony.

Going for a run my ass, she thought, resisting the urge to race up there, confront them both.

She wanted to cry.

She wanted to scream.

But she needed to be smart about this. She'd gone to too much trouble to waste her efforts on raw emotion, and she pulled out her phone then sent the text she'd pretyped into the message: She's here.

Waiting was hell. She checked the time on her cell phone, saw it was five past seven. Hearing nothing coming from upstairs, she opened the broom closet, slipped out the back door and around the side of the house.

But did she? Was it worth the price?

It was, she decided, keeping close to the house, positioning herself at the garden gate just as her front door opened. She froze, her heart beating as she pressed herself against the side of the house. This was not going as planned. "Careful," she heard Devin say.

And then Marcie heard the front door close and what sounded like Trudy running down the porch stairs and on down the street.

Panicking, she grabbed her phone from her pocket, opened the text function, and typed: She's leaving!

No sooner had she hit SEND than she heard the engine of a vehicle from up the street. She opened the gate just wide enough to see a green pickup truck cruise past in the same direction Trudy had taken off, the driver glancing over as though looking at the FOR SALE sign posted by Trudy's driveway.

Unbelievable. He'd assured Marcie that she wouldn't recognize him. No one would ever know he was there.

And he was right. Because the person in that truck looked nothing like the same man.

That still didn't ease her fears.

What if she'd imagined this whole thing? Trudy and Devin's affair? What if Devin somehow found out what she had planned?

She'd been so careful to make sure he didn't notice the missing money.

Wasted money if she didn't go through with this.

Marcie stared at her phone, the screen still lit from the last text. It would be so easy to call it off. Pretend nothing happened, nothing was wrong.

That was exactly what she was going to do.

She shoved the phone into the pocket of her purple running suit, zipped it, then stepped out, and after waiting long enough to be sure that both Trudy and the truck were long out of sight, she jogged down the hill, telling herself that the best thing to do was get out, act normal. And so she took off at a slow jog just as the neighbor at the end of her street hobbled out his front door, then navigated down his porch stairs. She saw his paper near the sidewalk, jogged over, scooped it up, then brought it to him. That was normal.

"Morning," she said, keeping her pace steady, but slow.

He lifted the paper in greeting. "Nice day for a run."

And normally it would have been. A soft breeze carried the faint tang of salt from the bay, and the early autumn sun lit the dew on the grass as though someone had sprinkled diamond dust over it. The beauty was lost on her as she tried to put her husband and Trudy from her mind. Listen to the pace of her shoes on the sidewalk, the feel of the cool air on her face. Get into the rhythm. Run. Just run.

Soon her neighborhood was behind her, and she turned the corner to Lincoln Boulevard, jogging along the bike path, following it through the Presidio, the air thick with the scent of eucalyptus. Eventually she reached the Presidio Promenade trail by the bay, the sandy gravel crunching beneath her as she ran. To her left, the top of the Golden Gate Bridge was hidden in the marine layer, waiting for the sun to burn it off. A gull cried out as it flew past then dove down toward the water. The faint bark of sea lions drifted in from the bay. She turned away, not caring. Ever since she'd suspected Devin and Trudy were having an affair, the world had turned into a darker place. She'd imagined any number of ways to end this thing between them, none of them good. A week ago, she and Trudy had been running right here on this path, and she'd actually contemplated turning toward the bridge, having Trudy follow her, then pushing her right down to the rocks below. Had it not been for the witnesses, she wondered if she would have.

That was when she realized there were far better ways to end this thing between them. She'd come up with what she thought was a good option.

So why was she having second thoughts?

Because she couldn't bear it if she was wrong and Devin somehow found out.

Call it off. It's not worth it.

That was the thought going through her head as she continued down the path and noticed a couple kneeling in the gravel up ahead, their backs to her. They seemed to be tending someone on the ground, and she caught a glimpse of navy-and-black running clothes and then a familiar Nike shoe...

She quickened her pace, raced up to the couple, then stopped beside them.

The man looked up at her. "We just found her like this."

Everything Marcie had so meticulously planned turned into one giant blur. Her heart stopped momentarily then started up again with a thud. It was several seconds before she could think clearly. Realizing this was supposed to be her friend, worried that this couple tending her could read this morning's every guilty thought flitting through her head, she shook herself and tried to think of something appropriate to say. "She's...okay, right?"

Return to The Last Good Place